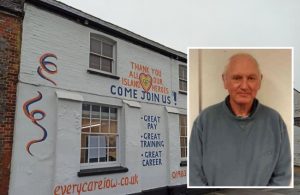 “He was a wonderful, wonderful man, and deserves to be remembered”

A care company has shared the tragic story of an Isle of Wight employee who died of Covid-19, falling ill just a week before staff were due to receive their vaccinations.

Both his parents and one of his brothers had died before him and his pet cat died just days after his death.

Now, Andy’s former colleagues want everyone to know his story – a life devoted to caring for others.

Isle of Wight-based Everycare says it is arranging and paying for Andy’s funeral, describing him as the sort of person everyone liked to work with.

He moved to the Isle of Wight, around ten years ago and had worked with Everycare for around six and a half years.

He contracted coronavirus at the end of 2020, but the case was not thought to be related to his work.

David Bean, Everycare managing director, said: “As a carer, he did a fantastic job.”

This story can be read in full by visiting  www.countypress.co.uk